Home › Who We Are › Joe Jacobson 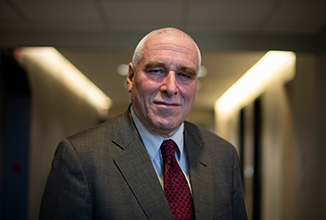 Joe Jacobson has been practicing law in St. Louis since 1986, except for three years early in his career when he practiced in Washington, D.C. His primary focus is on civil appeals and business disputes, but he also performs transactional work relating to business contracts and the purchase and sale of commercial real estate and privately-held businesses. Joe has tried more than 65 cases to a verdict or judgment in front of a jury or judge, and has been the primary attorney in approximately 100 appeals. Joe has obtained multiple judgments of in excess of $1 million, including most recently a 2019 judgment for $2 million (half of which was for punitive damages) and a 2018 judgment for $5.6 million (same).

There is no area of the law that does not interest Joe. His trials and appeals have included subjects as diverse as patent validity and infringement, the taking of private property by for-profit corporations, a union's duty of fair representation to its members, a farmer's right to divert surface waters to protect his crops, a claim against Chuck Berry by his former pianist for copyright infringement (Chuck won), and every kind of business dispute imaginable.

Joe is certified as a civil mediator under Missouri Supreme Court Rule 17 and received a certificate from the University of Southern California for completion of the Advanced Arbitration Academy of the USC-JAMS Arbitration Institute in August 2016.

Among other professional roles, Joe has served as General Counsel to the Housing Authority of St. Louis County since 1998. In this capacity, he handles the Authority’s litigation, provides legal counsel to the Board of Commissioners and the executive staff, and is involved in the preparation, negotiation, or review of contracts, bond issues, real estate transactions, and employee benefit plans. He is a member of the Metropolitan St. Louis, Missouri, and American Bar Associations. He has served as chairman of the appellate practice committee of the Bar Association of Metropolitan St. Louis, and has been an active member of both BAMSL's bench and bar and the Missouri Bar's fee dispute committees. In 2011, Joe was nominated by Missouri's Appellate Judicial Commission for a seat on the Missouri Supreme Court.

When not practicing law, Joe enjoys painting, drawing, photography, walking, bicycling, traveling to foreign lands, and spending time with his family and friends. Joe serves his community as the President of the Board of Directors of Carondelet Leadership Academy, a public charter school serving a high-poverty community in the far south of the City of St. Louis.

Joe spent 20 years as one of the founding shareholders of Green Jacobson, P.C., a prominent St. Louis litigation boutique law firm. At the beginning of his career, Joe spent a year and a half with a large St. Louis-based law firm, then three years in private practice in Washington, D.C., handling complex civil litigation and white collar criminal defense, and four years as an associate at a mid-sized law firm in St. Louis.

Joe has tried to a verdict or judgment over 65 cases, and has settled many more. These cases have involved a whole range of business disputes, including partnership and fiduciary claims, contractual disputes, real estate development disputes, and cases involving fraud, RICO, or other business misconduct. Joe represents both plaintiffs and defendants, and has represented such diverse clients as automobile dealers, real estate developers, Indian tribes, furniture retailers, gaming companies, energy companies, construction contractors, and individuals who have been defrauded, crashed, blown up and burned, sexually harassed, discriminated against, deprived of commissions, misdiagnosed, mistreated, and falsely charged with dishonest conduct.

One of Joe's most significant recent trial victories was in Heifetz v. Apex Clayton, Inc., which was unanimously affirmed by the Missouri Supreme Court July 2018. Joe represented a group of limited partners in a real estate investment against the general partner. The jury awarded Joe's clients $2.8 million as the value of their partnership interests, and an additional $2.8 million as punitive damages for breach of fiduciary duty.

Two of Joe's more significant appellate victories are 66, Inc. v. Crestwood Commons Redevelopment Corp., 998 S.W.2d 32 (Mo. 1999), which reestablished an antique cause of action for landowners subjected to abandoned condemnations and strengthened the ability of plaintiffs to reach through underfunded entities to their owners for compensation, and In re BankAmerica Corp Securities Litigation, 263 F.3d 795 (8th Cir. 2001), which established a new exception to the federal Anti-Injunction Act in the context of securities class actions under the PSLRA.

A sample of other appellate decisions in which Joe was the sole or lead appellate counsel include: