Home › Who We Are › Allen Press 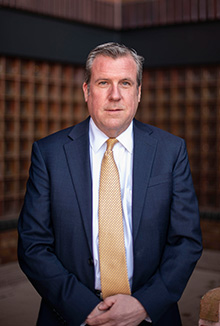 Allen Press can be found in courts from New Jersey to Detroit to Long Island representing the airline pilots and automobile dealers who have made him their top choice for counsel from across the United States.

It is Allen's hard work, persistence, and success in bringing actions under the Railway Labor Act — which governs union relations for airline flight crews — and in assisting dealers suffering arbitrary conduct by automobile manufacturers, that have resulted in this national practice. Allen was lead counsel for the pilots of the former TWA in their successful duty of fair representation action against their former union, the Air Line Pilots Association, which settled for $53 million after a successful trial on liability.

Allen also has extensive trial experience in construction disputes and numerous other areas of business disputes.

Allen started his career as a law clerk for the Honorable Edward D. (“Chip”) Robertson, Jr., then Chief Justice of the Missouri Supreme Court. After leaving his clerkship, Allen joined the St. Louis law firm of Coburn & Croft. That firm ultimately merged with the St. Louis firm of Thompson & Mitchell to become Thompson Coburn. During his seven years with that firm, Allen concentrated on complex commercial litigation and the defense of product liability cases in Missouri and Illinois. He joined Green Jacobson, P.C., a boutique Clayton litigation law firm, in April 1999. He became a shareholder in the firm in June 2001, and left the firm to found Jacobson Press at the end of December 2014.

Allen has litigated a wide range of commercial cases for both plaintiffs and defendants, including all manner of contract disputes, construction claims for both contractors and owners, fraud claims, fiduciary claims, and other business torts. He has special experience in motor vehicle franchise disputes and is a member of the National Association of Dealer Counsel.

While most cases are resolved without a trial, Allen has an impressive record in those cases that need to be tried. His trial accomplishments include the following: